Come join the party and let “Thrusty Thursdays” propel you into the weekend with double-R-rated musical comedy duo The Dirrty Show.
Tickets: $15
Showtime: 8:00 pm
Featuring a star-studded guest lineup on the iconic King Eddy stage, they’ll drive a powerful burst of hilarity and musicality into the evening with an unfiltered blend of quick wit and slick licks. It’s as if a late-night talk show knocked up a variety show on a one-night-stand; anything could happen next, so keep your mind open. You’ve never seen a curated calamity quite like this, with a new theme and guests every “Thrusty Thursday.”
The first show on May 5 features music by Amy Hef, an electrifying artist characterized by her unique blend of talent and humour, and comedy by Brittany Lyseng, a nationally touring stand-up comedian with a down-to-earth style.
About The Dirrty Show:
The Dirrty Show is the delightfully crude comedic project of musicians Kayla Williams and Melody Stang. “Thrusty Thursdays” was conceptualized from an extensive song list, genre bending catalog, and many obscure stage performances, and the desire for more. The duo aims to inject extra hilarity into their already infectious ear-worms and inappropriate ditties in a whole new way. Get your tickets to see the unique collaborations that will only ever happen once!
About Amy Hef:
Equal parts natural talent, compassion and humour, Amy Hef is a multifaceted artist who brings a truly unique approach to everything that she does. In other words, there is no one out there quite like Amy Hef. Born in North Battleford, Saskatchewan, Amy is the youngest of five children and was raised in Alberta within a deeply religious family. As an adult, Hef had to look inward to become empowered and is now recognized as one of the few out and proud, queer musicians in the province. In recent years, Hef has won multiple awards including Female Artist of the Year (2017) and Pop Recording of the Year (2019) at the YYC Music Awards. Needless to say, her fresh and bright perspective is captured in every song and every live show. Amy’s songwriting and style has officially found its home in country music and she is the first to tell you that she is bringing the party!
About Brittany Lyseng:
Brittany Lyseng is a nationally touring stand-up comedian. She can be heard on CBC Radio’s Laugh Out Loud, CBC’S The Debaters and Sirius XM. Brittany’s down-to-earth view of the world is capturing audiences across Canada and has earned her a place at the Just For Laughs festival in Montreal, JFL Northwest in Vancouver as well as JFL42 in Toronto. Brittany’s humble beginnings as a tradesperson are apparent in her unique delivery and a one-of-a-kind view of the world. In 2019 Brittany released her first album “Going up” which debuted at number one on Itunes and was named one of the top ten albums in the country by Interrobang.com. You can catch her 2020 television debut on CBC GEM – The New Wave Of Stand Up Comedy.
This show is recommended for an 18+ audience. Get ready for some carefully crafted musicality, comedy, and otherwise unmentionable sexual subject matter!
See less 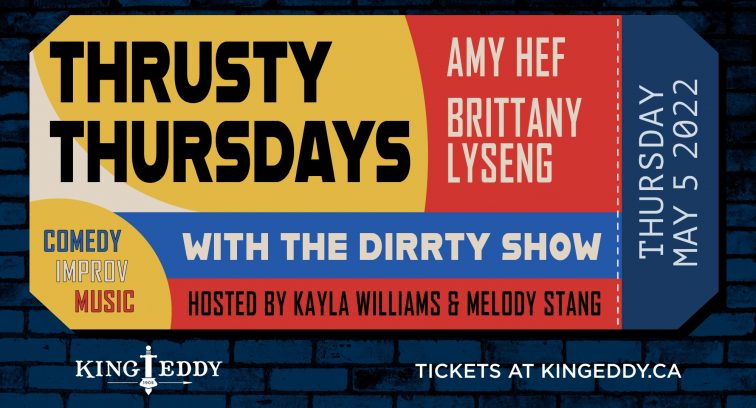 The Dirrty Show- The Radiant- Banff AB with Cabaret Calgary